Article by Val Rigoli ©, free advice freely given, my personal thoughts and advice gathered from in-excess of 45 years of practical hands-on experience, learned skills, and industry knowledge.
Please check out my other informative articles too.

Well, here are a few facts about battery chargers, and you can then make up your own mind as to what sort of battery charger you think is best for charging up your batteries.

The standard automotive battery chargers that most of us know and own are what we call (linear) constant voltage chargers. In simple terms what this means is as the battery is charging the voltage slowly rises, and as the voltage rises the current (amps) that the charger is putting into the battery starts to drop off, and keeps falling until the battery voltage is up around 14 volts or so, at this point the amps going in has now dropped off to almost nothing and the battery is deemed to be 'charged' but they are NOT really fully charged, and also this process can take a very long time because of the constantly reducing current input. On the other hand these chargers when left connected to a battery for too long can, and often do, overcharge and damage the battery.

Now with the newer Smart multi stage chargers, these are a much different animal, and they do cost a bit more, but what they can achieve is well worth the extra money in most cases, and are good value if you value your batteries, the first big advantage is that they do fully charge a battery, and fast too, and at the same time they do it safely, giving the battery what it needs, when it needs it.

Now in contrast to the auto (constant voltage) charger, these smart chargers do multi stage charging, a smart 3 or more stage charger are usually sized to the battery bank it has to charge, all battery chargers should be sized for the job, too big or too small and they won't do their job very well, and can in most cases kill the batteries over time.

Smart multi stage chargers start first with the 'boost' stage, in this stage the charger puts in as much current as the charger is capable of for as long as it can safely do so, in the this stage it operates as a constant current charger, so if it's a 10A charger it will put in a constant 10 amps until the battery reaches a voltage set point that is normally about 14.4-14.7v, at this time the battery is about 75-85% charged.

Now the next stage begins, the 'Adsorption' stage, and the charger now turns into a constant voltage charger, it now holds the voltage at the set point,  say 14.4 volts, now the only way it can do this is it must back off the current, otherwise the voltage would just keep climbing higher and higher, so it must vary the current to hold the battery at the 14.4 volts as the battery adsorbs the last of the required current that it needs to become fully charged.

After some time the amount of current flowing to keep the battery at the set point is so small that the chargers smart processor circuit says to it's self, "hey, I've been holding this battery at the required voltage until the amps have dropped off to almost nothing, this battery has stopped accepting any real current now, so it must be fully charged!"  the charger now convinced that the battery has finished charging and is fully charged, goes into the next stage, the 'Float or maintenance' stage, this is where it backs the current off even further so the battery voltage drops to around 13.5-13.8v, and now holds it there by varying the current again, the lower voltage is below the electrolytes gassing point and can be left on charge like this indefinitely, and if power is being drawn from the battery the charger just ramps up the current out-put to match the draw.

The real advantages of smart multi stage chargers are, faster charging, fuller charging, ultimately leading to longer battery life, and more usable capacity from the batteries, less electrolyte loss in the case of wet flooded batteries, and/or little chance of over charging and killing sealed or wet batteries.

The feed back I get from my many customers that have bought this style of charger has been very positive, with many saying just how great they have found them, and how they are not game to use their old car chargers any more, they just don't trust them with their batteries.

So be warned, once you have used a 'Smart' battery charger a few times, you won't ever want to go back to the old linear type charger again.

Now while I would hate to be accused of scaremongering, I will show just one example of what can happen if the wrong battery charger is used, and I have personally seen this numerous times!

So occasionally perfectly good batteries are destroyed by people using the wrong type of battery charger or the wrong size battery charger for the battery or battery bank.
Or in the case of this battery, they used a 'claimed' quality 3 stage charger, but it was really just too cheap to be true, and sadly the battery paid the price.
I guess this battery owner did too, so another new battery, and this time a true quality SMART battery charger! It is sad that a few people have to pay twice! 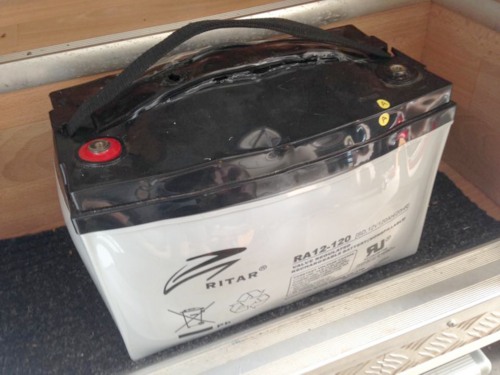 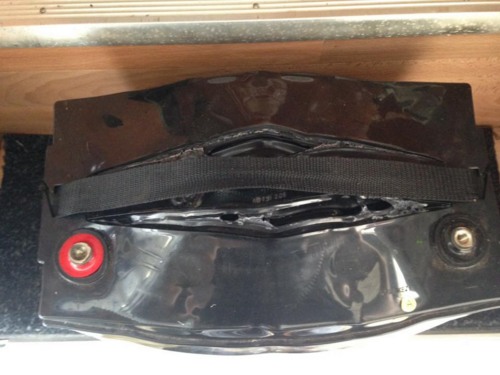 By the way, this battery through no fault of it's own went into what is called thermal runaway, after the battery charger did not drop back in to float charge when it should have, and NO it did not explode!

However it did get so hot that the heavy duty plastic battery case became very very soft and pliable, and swelled up under the pressure of the sealed battery gasses, until the case breached and the gas could escape!

Even so, under these extreme conditions I believe that this AGM battery was in no real danger of exploding or causing a fire, however I would not like to have been too close to it while it was in this much distress!!


Please share this page with your friends >>
mrval.net and